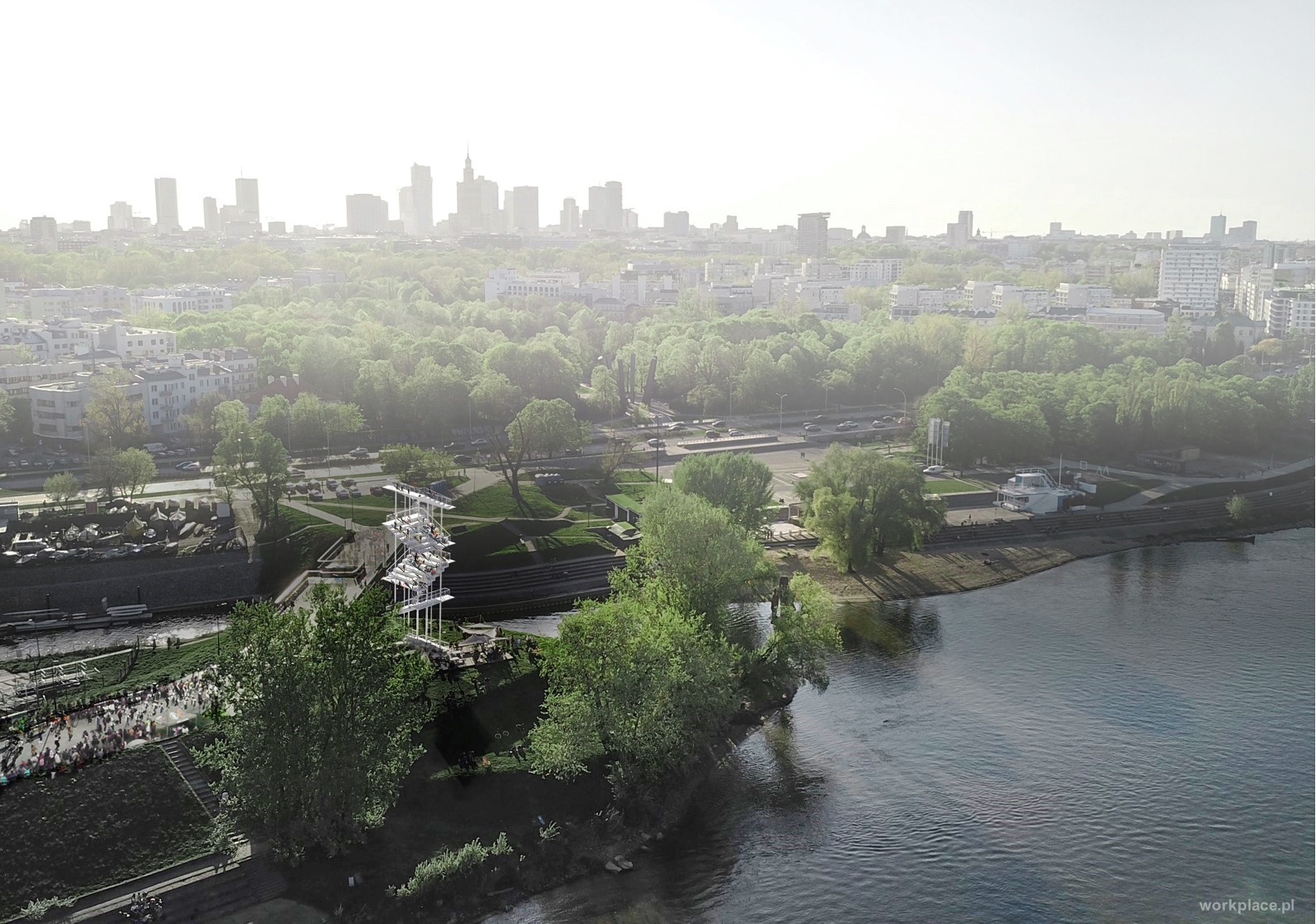 Warsaw skyscrapers rising above the tree line. Sunset beams reflected on their glass elevations. Vistula river crossed by bridges. The National Stadium. All this intertwines to create a unique panorama of Warsaw. We were missing a place that would allow us to experience the emotions associated with this view. The observation tower on the Czerniakowski Spit is our answer to this need.

We created a concept of an architectural installation, giving another reason to extend the walk from the Royal Łazienki to the Vistula River. We have chosen a simple and characteristic form that draws from the heritage and spatial context of the place. A form that can become another symbol of the capital city.

What is the story behind this idea? In order to present our initiative to the city, we arranged a meeting with Vice Mayor Michał Olszewski. During the conversation we met Marek Piwowarski, Director of the Greenery Management Board of the Warsaw City Hall, for years involved in the project of revitalization of the Vistula river areas. After presenting our bold and sometimes visionary ideas, we received from them valuable suggestions concerning the vision and possibilities of the project implementation. We found out that there are two places on the Vistula that, despite their potential, are not fully developed. One of them is the headland which opens the gate to Czerniakowski Port. This is the place where we proposed an urban landmark as a dominant feature of the Vistula boulevards.

Our goal is to create an architecturally unique place, which thanks to its functionality evokes emotions. From the promontory we can see many characteristic frames of Warsaw. The rising sun emerging from the treetops of the Praga side and the National Stadium dominating over them. The line of Warsaw skyscrapers at sunset. In the south a view of Vistula river with “Gruba Kaśka” in the background, and looking more to the west – Czerniakowski Port. Each of these pictures has its own charm. They inspired us to design a tower, from which you can admire each of these frames.

We want to create an intimate place, good for long conversations, and sometimes vibrant like the famous Warsaw stairs, where we like to spend time with friends. These iconic concrete steps and their function, connecting people for years, served us as an inspiration for the final form of the tower. We “cut” the shape of the steps from the waterfront. Then we stacked the modules on top of each other and rotated them so that each of them gave the possibility to look at the surroundings from a different perspective. We supported the whole on an openwork skeleton, constructed on the basis of the Vierendeel truss principle. In this way we created a 24 meter high construction, light as a heron taking off for its flight. We hope that just like this symbolic bird, our idea will someday soar further towards realization.

Our initiative would not have come into existence if it were not for the interest of the city authorities. Mariusz Frankowski, City Councillor and Executive Director of MJWPU, helped us to organize the meeting with the Deputy Mayor and Director of the Greenery Management Board, to whom we would like to thank.